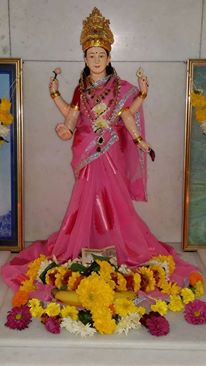 Let the world demand and Mother shall give peace and happiness. The trouble is , the world wants all happiness without obeying the Divine Laws , remaining all the while violating the Law, and remaining fretting and fuming with ever-ungratefulness and rebelliousness, he can be capable of.

Mother can set things aright in no time with a High Supreme Command. But then where is the playfulness and joy ?? Mother wants to enjoy the pleasures of seeing how people try to cheat Her, ignore Her, insult Her. How far does the mankind go? Thinking too much by itself by itself? She tolerates our weakness but not wickedness. A king plays with his companions. So many defeat him. So may quarrel and play tricks with him, but as soon as he says, “Stop”- finished. Everyone immediately gets up as if by an electric shock, leaving all the cards and horses and elephants of a chess, there and then, as mere puppets. All shouting and quarreling and claiming disappears in a second.

Where is again the pleasure and joy in lovability shown by others to us if it is under compulsion??

I order every child of mine must prostrate to me on leaving the bed. Is there any real pleasure in having such a prostrations? The joy proceeds when you leave them to act as they like and someone prostrates. The pleasure of prostration is , when there is no compulsion and no automatic mechanical prostration.

EXTRACT FROM THE BOOK : MAI-ISM